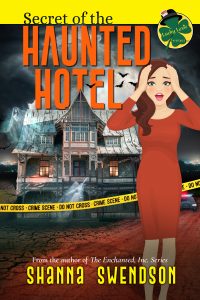 Secret of the Haunted Hotel comes out tomorrow, and you should also be able to order the paperback. It will eventually be in online stores beyond Amazon, but I don’t know if that listing has propagated yet.

I’ve realized that this is the second book in the series that involves Lexie being stranded by weather, but that really is a thing that happens in the part of the world where the series is set. In this book, it’s also part of that kind of story. There’s no story if the cops can get there right away or if people can leave. They have to be isolated in the creepy country house while knowing that one of them is a murderer.

A few years ago, there was an outdoor event at a venue not too far from where I’ve set the fictional town in this series. It had been a wet fall, so all the creeks, rivers, and lakes were already high and the ground was saturated. Then a system hit us and seemed to just sit there. The rain wasn’t that heavy, but it was constant. The outdoor event wouldn’t have been all that bad, though, except that a nearby creek had overflowed, and it sent a sheet of water down a hill, so that the entire event site essentially became a flood plain, with water ankle-deep. The water was flowing to another creek down the hill from there, and the road leading to the venue crossed that creek. It was so deep under water at that point that you couldn’t even see where the bridge was. That meant there was only one road leading out of the site. Fortunately, it was the way I would have been heading, anyway, but most of the side roads were closed. I would not have wanted to be driving out there after dark because all of a sudden, the road would be a creek. There were a few spots where the water was coming down a hill and across the road. You could still see the road because it wasn’t that deep, but it was a few inches deep all over the road. At night, you wouldn’t have been able to tell where the road was.

Even though things were bad and getting worse, there was also a tornado warning, so I didn’t want to get on the road. They herded everyone into one of the indoor facilities at that place until the danger passed. Eventually, the rain eased up, but everything was still under water. Eventually, I was able to drive home, and I was totally drenched and covered in mud.

In that part of the state, there are often flash floods where they have to get people out with helicopters, and there are high-water rescue teams for when the roads flood and people get stranded in their vehicles. So, I’m not stretching things to have a couple of severe weather events in the same area within a short time frame. It’s a hilly area with a lot of creeks and a few rivers, so you get flash floods. I did restrain myself and didn’t include the tornado. I think I’ll save that for another book. I also left out the drastic weather change that followed that system. The next day, it was sunny and muggy, though the ground was still soaked and there was standing water. By the time I got home after the event, another front was coming through, and it dropped something like 20 degrees. It was just starting to get chilly when I got home, and then it got downright cold.

Basically, if you like having weather affect your plot, Texas is a good place to set your book.