Over the past few weeks, I’ve focused my weekend movie nights on rewatching/watching the Pirates of the Caribbean movies. I saw the first three in the theater when they came out. I have the DVD of the first one and have watched it multiple times all the way through. The second and third were the sort of thing I’d stop on if I was channel surfing and they were on TV (back when I had cable). I don’t think I’d ever rewatched them straight through from beginning to end. I would drop in on them, watch my favorite parts, and then move on. I’d seen most of the fourth one on TV, but I don’t think I’d ever watched it through from beginning to end. There were scenes that were familiar, but there was a lot I didn’t recall. I hadn’t seen the fifth one at all.

It occurred to me while I was watching that these really are more “fantasy” movies than “pirate” movies. The only actual piracy — as in raiding, looting, and pillaging — happens near the beginning of the first film in the attack that kicks off the story. For the rest of the series, “piracy” is treated as a culture that’s being oppressed by the British government/East India Trading Company. It works like a secondary-world fantasy in which there’s something similar to something in our world, but is actually quite different in the way it works. The plots are all about breaking curses and finding magical objects or substances, and the resolutions to most of the stories involve magic in some way. I think the geography even works differently, since they seem to be making quick side trips to Singapore from the Caribbean, long before the Panama Canal. So, fantasy.

Looking at it that way, these movies actually work to scratch my itch for a particular kind of fantasy movie. There’s lots of swashbuckling adventure, a good dose of humor, and a dash of romance, all woven around magic and some decent worldbuilding (not so great if you’re looking at these as historical fantasy, set in a particular place and time, but it works pretty well if you consider it secondary-world fantasy where some of the places happen to have the same names as in our world).

I think the pacing on the second two movies gets weird. They’re very episodic, going sometimes rather abruptly from one sequence to the next. There’s a lot of “and then” instead of “so then.” It helped when I started thinking of those two movies as a season of a streaming series. They divide pretty neatly into episodes, so that you resolve something, that’s the end of the episode, and then you pick up in the next episode with a new problem.

The fourth movie doesn’t really work for me. I’ve mentioned the fact that it doesn’t have a protagonist. There’s a story line that just ends without any resolution. It gets better with the fourth film, where we have a protagonist again and a fun love interest. It’s lacking the magic (the storytelling kind, not the literal supernatural kind) of the original films, but it’s still a lot of fun. 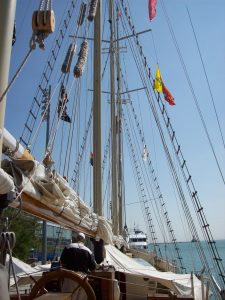 I have a weird fascination with sailing ships, so I love the idea of a fantasy with a tall ship. There’s something so romantic about the image. The centerpiece of my last real vacation, a trip to Chicago, was an excursion on a tall ship on Lake Michigan. I got to help hoist the sails (hard work!) and then experience traveling only under sail power. I’d been on smaller sailboats before, but not one that big on that big a body of water. I seem to live in entirely the wrong part of the world for the things that fascinate me. A person who feels most alive in a forest and who loves tall ships probably shouldn’t be living on the prairie.

I need to find some sailing-focused fantasy novels to read. I loved the Liveships books by Robin Hobb. I’ll need to dig around for more.