I’ve found myself taking a journey down memory lane the last few days, thinking about the origins of my least-appreciated series, the Fairy Tale books. It was at about this time in 2009 that I took my research trip to New York to prepare to write the first book. I guess I started thinking about that this week because there was all the talk in the news about a tropical storm approaching (now it’s a hurricane), and a tropical storm hit New York while I was there. The first day of my trip was gorgeous — warm and sunny. I spent the afternoon wandering Central Park. It rained the rest of the time I was there, something that found its way into the book. I didn’t mind so much because I love rain, but it did get heavy at times, and one downside of rain is that it doesn’t offer many opportunities to sit down and rest while you’re outside, unless you want to sit in a puddle on a wet bench, so my feet and legs were killing me by the end of the day. 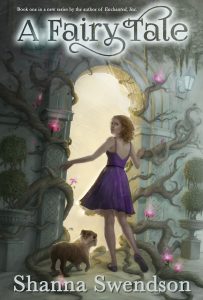 I do hope to write more books in that series. I know some character arcs I want to do, but I’m not quite yet clear on a big-picture plot, and since those books make the least amount of money for me, and they take me a lot longer to write, they’re lower on my priority list.

Still, I really do love them. I think part of the reason that they’re hard to write is that they come from a dreamlike place in my brain, and that makes translating them into words difficult. The character of Sophie came to me in a dream around the time I was right out of college. She had a different name (the name she had in the dream ended up being the name of a main character in a TV series that I saw not long before I started writing the book, so I had to rename her), and she didn’t have all her traits, like being a dancer or having an unusual heritage, but the personality was what was in the dream. I’d been auditioning that character for a leading role in every story idea I came up with, but she wasn’t quite right until I had another dream of a woman in a floaty floral dress walking a bulldog down a city street and disappearing into the mist. This woman was the character who’d been living in my head all that time, and I wanted to figure out the circumstances of where she went and what was going on. I woke up in the middle of the night one night and wrote down the scene in which Sophie wakes up, realizing that something has happened to her sister and she needs to go to her aid (before I knew what happened to her sister). Another night, I woke up and wrote down an early phase of what would be the back-cover copy. The book changed a lot after that, but the central concept was a Southern belle queen bee type taking on a fairy queen. From there, I started researching fairy folklore and related literature. There was the Tam Lin story about rescuing a lover from the fairies, but I also loved the Christina Rossetti poem “Goblin Market,” which was about sisters. That’s probably what influenced that midnight waking scene about having to rescue a sister. Other story fragments, like the elderly sisters with a shop, attached themselves to that image, and then it took me ages to tease the plot out of all these pieces.

Before I took that trip to New York, I already knew about the dual worlds, but the weather helped me with that because it really was like two different worlds, the park I saw my first day when it was warm and sunny and the park I saw the second day when it was dark and pouring rain. The colors were different. The first day, the park was full of people, and later it was almost deserted. The sounds were different. I noticed the lampposts, since the lamps were all lit, and that made me notice things around the lampposts that I hadn’t seen on a sunny day.

I think I was in the middle of writing the book when I first heard a song that I felt perfectly described Sophie, and I took a detail from the song to add to the character — the mismatched eyes, which ended up being a perfect metaphor for her nature. The song is actually supposed to be anthropomorphizing the month of August, on the cusp between summer and autumn (well, in northern Europe — here, it’s the height of summer), but it still seems to fit this mercurial character.

Hmm, I may have to bump up brainstorming another book on my priority list because I’ve realized how much I miss these characters.

One Response to “Once Upon A Fairy Tale”