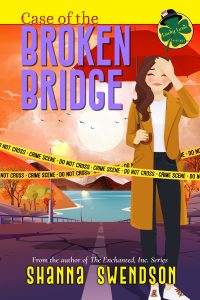 I got my act together, so I will hit my targeted release date. Case of the Broken Bridge will be released next Thursday in e-book. I’m aiming at getting the paperback around that time, but you never can tell how long it will take for those to go live and be shipped. You can pre-order at Amazon, Kobo, and Apple, so far. I’ll try to keep up with the links as stores go live. Check the book’s page on my site for all the information and purchase links.

This book was a very long time in the making. I first outlined it last year. I think it was going to be #4, happening during the summer and before the back-to-school timeframe of Vanishing Visitor. And then I realized there was no way I could get three books written before Halloween, and I really wanted to do the Haunted Hotel book then. So, I put this story aside to use it later.

Early this year, I got out those notes to write the book. It actually fit even better in the timeline this way, since it involves a bridge that got washed out during a storm, and there’s a bad storm in Haunted Hotel. There was just one problem: I seem to have knocked over a water glass and spilled something on my notes, and the ink washed out on the page where I wrote my ideas for how to resolve the story. So, I had all the setup but I couldn’t remember how to resolve it and had to figure that out all over again.

Then as I was writing the book, on the scene in which the victim is found, I heard several loud pops coming from the street by my house, and soon I was watching a crime scene team on the street my office window overlooks for what turned out to be a murder investigation. It was a shooting, someone in one car shooting at the person in the next car, and from what I can tell, the actual shooting happened right in front of my office window (my office is on the second floor, and it overlooks a major road that’s on the other side of a tall brick wall from my house). I didn’t see anything because I was writing, but I heard the gunshots. Not long after that, I was watching the evening news, and they mentioned a shooting at a coffee shop in a nearby town — and I knew the victim. She was the daughter of some friends from church. I’ve known her since she was born. In fact, I had her baby photo on my refrigerator until I got a new one a couple of years ago and cleared off the baby photos of kids who were in college.

At that point, I just couldn’t make myself write murder mysteries. Murder wasn’t something for fun and entertainment. I put that book aside and worked on something else. But then this summer I found myself thinking about it, and I wanted to get closure, so I finished it. And then the timeline worked out so that I needed to do a Christmas book.

This book is a locked-room mystery, but with a paranormal twist. I ended up having a lot of fun writing it, and I think that the emotions I associated with it because of everything that happened around it ended up making it a really strong book, probably the best in this series so far. I’m proud of this one.

I’ve drafted the Christmas book, and I’m about to start revising it. I hope to get it out just before Thanksgiving.

I’m not sure at this point when or if I’ll do more mysteries beyond that. I’ve found that I still don’t really want to read mysteries. I have a few vague possible plot ideas, but nothing firm. We’ll see what pops into my head, but for now I need to take a break from these characters. You’d think I’d learn my lesson about doing two books in the same series in a row. I can’t read two books in a series in a row. And we’ll see how the series sells. It’s been profitable, but based on the time spent writing and the amount it’s earned, I’d have made more money working those hours at a grocery store. There are some promo things I’d like to try, but if things don’t perk up on this series, I may have to call it quits at 7 books and try something else. That’s more books than a regular publisher would have given it before pulling the plug. I tried the move to mystery because it seemed like there was a big crossover audience from the Enchanted, Inc. books to cozy paranormal mysteries, but it seems not. Or else they haven’t found out about it. It’s a pretty crowded field. I don’t know if it’s a visibility/discoverability issue or a problem with the books themselves, but I need things to tick up a bit before I invest a lot more time in these. Or maybe I’m just tired after a few months of crunching and I’ll be eager to return to this series after I work on something else. I’ve actually planned my writing schedule for the next two quarters, so maybe that will help me stay sane.