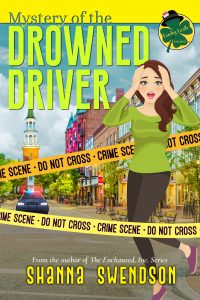 Tomorrow is new book day! This month kind of got away from me. I had planned all kinds of promo stuff, and then suddenly Mystery of the Drowned Driver is coming out tomorrow and I haven’t done anything.

At any rate, you can pre-order now and get it first thing tomorrow, and the paperback is available to order from Amazon. It will eventually be available in other places, but it takes a while to propagate through those systems. You can find the various links to order here on the book’s page.

I had a lot of fun writing this one. It includes one of my favorite ghosts, someone I kind of wish I’d used as a character before I killed her and made her a ghost, but then I’m afraid I wouldn’t have been able to kill her. I’m learning that’s one of the tricky things about mysteries. If you make the victims sympathetic and interesting enough for readers to want their murders solved, then you feel sad for having killed them. I still get weepy about the valedictorian who was killed in the backstory of the first book in this series. I’ll actually tear up thinking about her wasted potential, and then I remember that she never existed. I made her up, and she was already dead when I made her up.

I wonder if I really have the temperament to write mysteries. Until these books, I hadn’t killed a character in a novel. I generally don’t even kill villains in my fantasies. They got punished, but they lived. I’d actually planned for Mimi to get eaten by a dragon in No Quest for the Wicked, but when I got there, I couldn’t do it to her. Not so much because I liked her too much to kill her, but because I felt it would change the tone of the book too much. It was funnier for her to come out alive with no idea what had really happened.

I think having victims for murder mysteries is a little different, since their purpose in the story is to be dead. It’s not like killing off an existing character who’s been in multiple books. I don’t think I’ll be drawing upon my ongoing cast of characters to come up with new victims. I might set up future villains that way, and maybe victims for lesser crimes, but I don’t think that any of the gang of regulars is going to get murdered.

And now I really need to come up with a crime for the next book. I’ve got the character story stuff figured out. I just don’t know what the main plot will be.