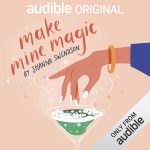 This is a fun contemporary fantasy with a touch of romance, along the lines of the Enchanted, Inc., books, but in a different fictional “universe.”

A woman taking her dream vacation honeymoon on her own after getting left at the altar does a good deed that leads her into a strange and magical side of New York that tourists don’t often get to see, and she finds herself in the middle of a magical power struggle.

The germ of this idea came from something that actually happened to me, though the outcome was very different. When I was in New York doing my location research for the Fairy Tale books, I was waiting for a “walk” signal to go from Columbus Circle to Central Park, and the woman standing next to me asked if I could help her cross the street. She was blind and using a white cane. The funny thing was, when I was in college, I volunteered for the services for blind students office, which mostly meant recording textbooks and exam questions by reading them out loud, but I sometimes was asked to escort students around campus, so I knew how to assist the woman. I found it interesting that out of all the people who were at that intersection at that time, she managed to ask a person who knew how to assist her.

When I was brainstorming ideas for a book proposal, that incident popped into my head as a good “what if” — how did she know, what if she had some way of reading who/what I really was, and what might have happened next? In reality, we went our separate ways after I got her safely to the other side of the street, but what if …?

Incidentally, this was an “oh, by the way” idea. When they asked if I’d like to write an Audible Original, I gave them several ideas. A couple of them were story ideas I’d been playing with for ages. I had chapters already written and had thoroughly developed those worlds. Right before I submitted the proposal, this idea popped into my head, and I added it as an “oh, by the way” thing. It was the idea they chose.

There may be a print version coming later, but it’s exclusive to audio for at least a year.