Book one in my new mystery series is now available for pre-order, so it’s definitely real.

I started working on this last November after I went to Bouchercon (the mystery convention). I’d had some vague idea about writing a mystery for years, and I’ve always read them, so when I learned the mystery convention was going to be in town, a short train ride from home, I decided to go, and that confirmed for me that I was going to give it a shot. The week after the convention, I sat down and got specific about the setting and characters, then figured out a crime. And then I wrote the book. This was a National Novel Writing Month book, since I wrote the whole first draft during November.

Then because I wanted to make sure the premise would sustain more than one book, I started drafting the second book in February. I was near the end of that draft when everything got crazy, when we were seeing horrifying reports of the pandemic in Italy and then in New York, and then when our area went on lockdown. I think I must have emotionally shut down because the last few chapters of that book read like a recap. It wasn’t until April or May when I was able to go back and fix the second book, but I still wasn’t happy about either of them.

Then in the middle of the summer I had a burst of inspiration and figured out what I needed to do to fix these books and did another round of revisions. Finally, I was happy enough with them to start getting things into production mode.

And now, here they are. Book one is coming October 1, and I’m planning on having book 2 released on October 29. I’ve got a third book roughly outlined, and that’s probably going to be my October project, aiming at a release in January (if it all comes together and isn’t one of those books I have to rewrite a dozen times).

I’m publishing these as cozy paranormal mysteries, but they’re very similar in style and tone to the Enchanted, Inc. books. There’s a case to solve, a smart and snarky heroine doing a lot of the work, and there’s a guy who might become a love interest. This series verges more on paranormal than outright fantasy, but there are people with uncanny abilities — something that can both help and hinder the crime fighting. The setting is what’s really different. It’s a small town in central Texas, not too far from Katie’s hometown (I haven’t yet decided if these two towns exist in the same fictional universe). It’s a fictional town I made up based on a couple of real places mashed together and a lot of imagination. Basically, it’s the kind of town you’d find in a Hallmark movie, but in Texas rather in some snowy place, and with a lot of stuff going on beneath the surface that you’d never find in a Hallmark movie.

I really have fun writing these. The town of Stirling Mills has been fun to escape to while I’ve been stuck at home. I’ve put an excerpt on the book’s page on this site so you can get a taste for the style. This scene happens after our heroine goes to a job interview, only to find the person who’s supposed to be interviewing her dead on the floor. Of course, the police want to talk to her about that. The links to order the book are also on that page. 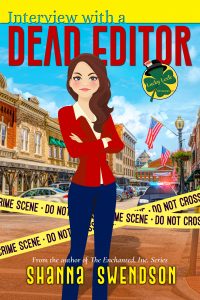