Over the past couple of years, I’ve developed a routine of Friday and Saturday movie nights. On other nights, I don’t just sit and watch stuff. When I’m “watching” TV, I’m usually also working crossword puzzles, reading, knitting, exercising, or doing embroidery. But for movie nights, I make some popcorn, turn out the lights, and just sit and watch. It’s an exercise for my attention span and almost like meditation in that I force myself to be in the moment and just watching what’s going on.

Of course, I can’t turn off my brain entirely. I can’t help but think about what I’m watching, and I’m usually analyzing the story structure. I make note of when I start the movie and how long it is so that I can find the various story milestones and see how closely it aligns to story structure.

If you don’t want to have the way you see movies changed, don’t read beyond this. Once you see this, you may not be able to unsee it whenever you watch a movie.

I recently read a book on story structure that said at the middle of a story, you’ll find what they call a “mirror moment.” That’s a moment of self-reflection in which the hero has to face the person he is and decide what person he’s going to be. This decision is critical because it affects the way he’ll deal with the final crisis in the story. Quite often, this moment of reflection involves a literal mirror or other reflective surface. 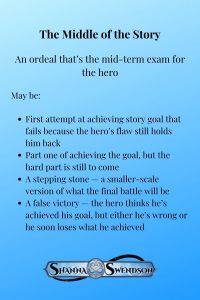 But I’ve generally found that the midpoint of a story is some kind of ordeal. It’s like the midterm exam of the story. The hero can’t reach his goal at this point or the story would be over, but he may make his first attempt at reaching his goal and fail because he hasn’t yet fixed the flaw that’s holding him back. Or he may achieve part of his goal but still has something else to do. This shows up in a lot of “get the thing to the place” plots. At the midpoint he gets the thing, but he still has to get it to the place. The ordeal could be a stepping stone, an initial test that somewhat reflects the ultimate challenge but that’s a bit easier than the final challenge will be. Or the hero may think he’s achieved the goal but then turns out to be wrong about that or loses what he achieved (like Indiana Jones getting the Ark away from the Nazis after an extended midpoint action sequence, only to lose it again). In general, something big and exciting or tense happens in the middle.

So, I started tracking this when I was watching movies, and I did start noticing the mirror moment. Something that would fit the idea of facing oneself is in just about everything I’ve watched recently. It very often does involve a mirror or other reflection. There’s a moment when the hero pauses and reflects on what’s happened or on his identity and has to be totally honest with himself or someone else. But this isn’t the midpoint. I’ve been finding it at the 3/4 or 2/3 point, right before the final “battle.” The exact point depends on how long and involved the final “battle” (literal or metaphorical) is. If it’s an extended sequence and there’s a long resolution, it will be at 2/3. If it’s a fairly quick bit of conflict and there’s not a lot of wrap-up, it will be at the 3/4 mark. I’m still finding an ordeal at the midpoint.

Usually the structure goes: Midpoint ordeal, celebration (we made it! There’s often a love scene here), realization that they still have to face the hard part, big setback, mirror moment, climactic “battle” scene (may be literal or figurative battle) that’s essentially the hero’s final exam.

It’s really easy to track this in a movie. I find it a bit harder in books because time gets wonky in books. Movies take place in real time. There may be gaps between scenes, so not every movie story happens within two hours, but once a scene starts, the amount of time it takes is the amount of time it happens. A two-minute dialogue scene takes the same amount of time as a two-minute action scene. In a book, that dialogue scene that would take two minutes on the screen may take five pages, while the two-minute action scene could take two paragraphs or ten pages, depending on how detailed the description of the action is, whether it’s “they fought” or a blow-by-blow telling with thoughts, emotions, and physical sensations described.

That makes it a little harder to open a book at the midway point and find the ordeal. Then there’s the issue of multiple viewpoints, so that one character’s ordeal may or may not happen at the same time as other characters’ ordeals, depending on whether or not there are subplots. A movie is closer to a short story in structure so is less likely to have multiple braided plots. There’s one ordeal and one final “battle.” A book may have this for each character, and each character may be on a different timeline. Usually the subplots wrap up before the protagonist has his final battle, since the resolution of the secondary characters’ plots may be what leads to the final battle.

Still, this kind of structure is helpful in planning a book. I’d originally plotted the book I’ve been working on with the idea of that mirror moment coming halfway through, which is part of why I’ve been feeling like I’m slow getting into the story, but if it’s at the 2/3 or 3/4 mark, then I’m closer to being on track. Now I just have to figure out what the ordeal really is.