My mini vacation didn’t quite go as planned. Although the forecast temperature was warm and it was a beautiful, sunny day, it turned out that the wind chill was rather bitter. I stepped out of the car at the state park, walked a little around the edge of the lake, and immediately retreated to my car because it was like thousands of tiny needles attacking non-stop. It was really disconcerting because the sun was so strong that I’d had to turn my car vent to as cool as it would go and the fan on high. Inside the car, it was a warm day. Outside the car, it was arctic.

So, I decided to go to a different park deeper into the mountains, in an area that was likely sheltered from the wind. And, at the very least, the drive to get there would be fun because it was on a twisty back road through the mountains.

And there I got to see this, which made the trip worth it. 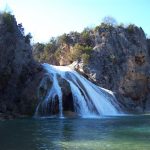 There was also a nice, sheltered hiking trail along a stream, through the woods, in a valley between hills, so it was rather pleasant. I got in a short hike, but the other trails at that park were on the sides of the mountains, where, again, the wind was pretty ferocious. After enjoying the scenery while driving around, I headed to the hotel and spent the rest of the afternoon reading and relaxing. By dinner time, the wind had died, which made the walk to a restaurant down the street not too bad. I came back from dinner, read some more, then decided to go for a swim at the hotel’s indoor pool.

Where, apparently, they’d decided to turn on the air conditioner in January. It was too cold to be in that room in just a swimsuit even before getting wet, and the water was icy. I’d thought the hotel web site had mentioned a hot tub, but I didn’t find it. It must have been outdoors. I gave up on the swim and went back to my room and watched figure skating while drinking cocoa.

I took the scenic route driving home, but unfortunately once you get into Texas there is no scenic route because the US highway merges with the freeway. I find freeway driving utterly exhausting. This area was really pretty and I’d like to visit that area again in better weather (and probably a different hotel), but I’ll need to see if I can find an alternate route. The freeway is quick, but it’s not fun. I think there are some back roads that might work, but I’ll need to research to be sure they cross the river that serves as the border between Texas and Oklahoma.

It was a nice little getaway that mostly served as a recon mission for things I might want to do when it’s not January. It’s close enough for a short trip, and it does look like there’s good hiking and scenery.

And now I need to dive back into my working schedule.

2 Responses to “The January Vacation”