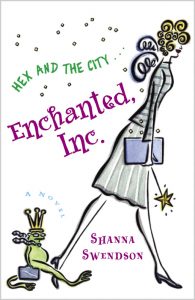 A question that’s come up a lot over the years since the first Enchanted, Inc. book was released, in both reader mail and professional reviews, is whether it started as Harry Potter fan fiction. Did I ever write a story about the Harry Potter gang all grown up and working at a magical corporation and then change the names and situations so it was “original” fiction?

The short answer is a definitive NO.

I never wrote fan fiction for the Harry Potter series. I didn’t even do a lot of mental fan fiction, where I think of stories in my head without ever writing them out, aside maybe from some speculation about what would happen in the next book while we were between books, and even there it wasn’t full plot lines.

I’m not even entirely sure why people might think that because I don’t believe Enchanted, Inc. maps all that well to Harry Potter. The best I can come up with is Owen being an orphaned wizard with dark hair. But aside from that, he’s not much like Harry. Harry wasn’t actually all that powerful or skilled as a wizard. He tended to prevail because he wasn’t corrupted—he wasn’t out for his own gain or power—and because he had allies. Owen’s probably more like Hermione. Katie would be our Ron, the one who lives out in the country with older brothers and who feels ordinary and overlooked. And from there, the comparisons break down. If I’d filed the serial numbers off a Harry Potter story to make it “original” so it could be published, I would have had to have done so with a chainsaw.

However, the Enchanted, Inc. books were somewhat inspired by Harry Potter in the sense that I wanted something like that but about and for adults, with magic in a contemporary setting and a dash of whimsy (I first came up with the idea before I read the fourth Harry Potter book, when it started getting a lot darker). At that time, fantasy was more likely to involve a medieval-like setting. You didn’t see a lot of fantasy stories set in the modern day, with cars and telephones, etc. At first, I just wanted to read that kind of thing, and when I didn’t find much (and what I did find was rather dark), I realized I’d have to write it. But that’s the extent of the Harry Potter influence.

When I created the characters, I was mostly playing with romantic comedy tropes because I was writing it as a chick lit/rom-com with magic in it. We’ve got our spunky girl-next-door underdog of a heroine, and I was originally going with a potential triangle involving the guy who seems great but turns out to be Mr. Wrong and the guy who seems like trouble at first but who turns out to be Mr. Right. I knew I wanted there to be a guy who uses a handsome illusion because the magically immune heroine would see the real thing, and we’d get the contrast between the way she sees things and the way other people see them — like the real-world situation where there’s someone everyone seems to swoon over while you just don’t get it. My initial idea was that the guy with the handsome illusion would be the shy, awkward one, and the one who was handsome would be smooth and confident. But then I realized that was pretty cliched and ordinary. I switched personalities between the two guys and they suddenly came to life and became the characters we know. That also killed the triangle because as soon as I figured out the characters, Owen was the obvious guy.

I also tried to take some of the standard rom-com events and situations and add magical or fantasy elements to them.

So, if it’s a fan fiction of anything, I would say that Enchanted, Inc. was more my spin on romantic comedies, taking a lot of elements and tropes and making them magical, than any kind of play on Harry Potter. It’s not any one particular rom-com, though. When I was plotting the book, I watched Bridget Jones’s Diary, When Harry Met Sally, You’ve Got Mail, Working Girl, and a few others like that.

I’m still surprised that publishing never really capitalized on the number of adult readers of the Harry Potter books (or HP readers who became adults as the series was being published) and published more of that sort of thing for adults. There are the Harry Dresden books, and maybe the Rivers of London series, but there hasn’t really been anything that captured a similar tone. I think it’s because the publishers only saw the HP phenomenon as a children’s book thing, in spite of the adult readers. Publishers are very narrow in their view of the market. In fact, the first Enchanted, Inc. book came out not long before Half-Blood Prince, and my publisher shot down my suggestion to play upon the idea of Harry Potter for grown-ups because the Harry Potter books were children’s books and we wouldn’t want to compare mine to that. I ended up doing an end-run around them and had a copy sent to the local reporter who’d been writing about the Harry Potter series and got one of the best media placements we had with that book, in a story about what to read while you’re waiting for your kid to finish reading the new Harry Potter book so you can get to it.

And I still want to read something like that, but about adult life that I didn’t have to write.

2 Responses to “The Harry Potter Question”