It’s less than a week until the release of Case of the Curious Crystals, book 2 in the Lucky Lexie mysteries. This one is a bit different for a mystery because it’s not about a murder.

Not that a series that involves ghosts and people with uncanny abilities is at all “realistic,” but I didn’t want to strain credibility too much and give this town a murder rate to rival any major city. I want it to remain the kind of town you’d want to live in, not one where you’d be worried about a murder every week or so. So the crime in this book involves burglary, something that is fairly realistic for small towns. The danger is more emotional than physical. I guess this book is closer to the Enchanted, Inc. series in the sense of what’s going on and what the heroine has to do about it.

There are dead bodies in book 3, and it’s based on something that actually happened in my city (though it happens to different kinds of people, in a different way, for a different reason), but there’s another crime woven into it. I have vague ideas for the next few books after that. One is a story I came up with the core of back in the early 90s, and I haven’t found a good place to use it until now. That one’s going to be a lot of fun to write.

In the meantime, fall hit with a vengeance this morning. We had one of those drastic fronts come through. It was about 70 degrees when I got up at around 7 this morning. At the moment (just before 11:30 a.m. as I write this), it’s 58 degrees on my patio, which is probably warmer than it actually is because that thermometer is near my house, and my house is stucco, so it tends to retain and reflect heat. And it’s going to keep dropping throughout the day. I think it’s a day for making soup and baking. I’m on “vacation,” and this is a great day for cozy things. 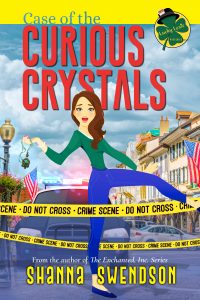