Over the past five or six years, I’ve realized that I’m a frustrated gardener. Gardens are my happy place. I like to be around flowers and plants. I read gardening magazines and watch garden tour travel documentaries.

Alas, I don’t have a garden or even a yard. I have a very small patio that only gets a few hours of sunlight a day. I can maybe get a bit more by moving the plants around the patio to follow the sun. I have about a foot of dirt between the concrete and the fence, but that gets even less sun, so there’s not much that will grow there. There’s some jasmine planted there that seems impossible to kill (it even came back after last year’s deep freeze), and I planted some mint last year in one of the bare spots left after the deep freeze, and it’s coming back this spring. Nothing else I’ve tried in that spot has done well. So, potted plants, it is.

I usually plant a few morning glory seeds because those bring me so much joy. I have a big pot with a trellis in it, and it’s on a wheeled dolly so I can move the pot around the patio to get enough sun. The last few years, I’ve had celosias, thanks to a “cutting mix” packet of seeds and then the plants re-seeding themselves. I guess I’m a lazy gardener because I don’t plant much. I just let whatever grows on its own grow. I might start some celosia seeds I’ve saved and then put the seedlings in pots.

But aside from herbs (the mint, basil, parsley), I haven’t been able to grow vegetables. I tried lettuce a couple of years ago, but between rabbits (there’s one that sneaks under the fence) and just general life, it didn’t do well. I got maybe one salad, and that required mixing in some store-bought lettuce.

But a couple of weeks ago, I read an article online about vegetables from the grocery store you could regrow. They said you could put the core from a head of lettuce in a dish of water, put it in the sun, and it would re-grow leaves. I was near the end of a head of green leaf lettuce, so I gave it a shot.

A week later, I had actual leaves growing. It works! 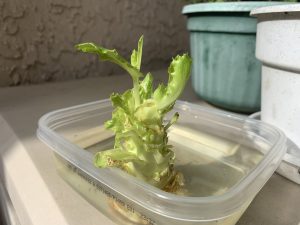 So, on the next head of lettuce, I left the smaller inner leaves on to see if they would keep growing, and that seems to be working. I don’t think I’ll be able to stop buying lettuce at the store, but I’m curious to see how far it will go. I may be able to fill in gaps between grocery trips.

I may see if I can sprout some garlic, and I’ve heard you can get green onions to sprout again. That would be handy because I often have recipes that require just a little bit, and it would be nice to snip some off instead of having to buy a whole bunch.

I still would love to live in a place where I can have a real garden, a full vegetable garden and a real flower garden, but given the way real estate has been going, that’s not going to happen unless my career makes a drastic change. I’ll make do with my kitchen table lettuce garden and a few plants on my patio.