An Excerpt From Enchanted, Inc.

I know most authors provide a sneak peak at the first chapter, but I just had to be different. The following is part of one of my favorite sequences in the book. It happens about midway through the book and doesn’t give away any crucial plot points, but it does give you a feel for what this book is like, with both fantasy and chick-lit elements.

All you need to know is that Katie, our narrator, is human. Ari and Trix are fairies (and her co-workers. We’re not sure what Isabel is, but she may be part giant. They’re all on a girls’ night out …

“Men are okay,” I said. “I like them well enough.” I hated to dampen a good bitch session, but I’d never had a guy really screw me over. They had to be interested enough in me to give me any hope in order to cause much damage, and I hadn’t had many get that close. Gemma was right, I needed a boyfriend.

“Yeah. But my roommate’s working to fix that. She’s set me up with half of Manhattan.”

“And nothing right for you yet?” Isabel asked.

“Not yet. But if you kiss enough frogs, you’re bound to stumble upon a prince.”

Trix slammed her palm against the tabletop. “Brilliant idea, Katie. Isabel, I propose a change of agenda. Let’s find ourselves some princes.”

“Where? The pond in Central Park?”

“That’s where I have the best luck.”

I had to interrupt. “Whoa, you mean, there really are men who’ve been turned into frogs?”

Isabel shrugged. “Sure. But what they don’t tell you in the storybooks is that only the real assholes get punished that way, and being a frog doesn’t have quite the personality reforming effect you’d expect.”

“But they do tend to be very, very grateful about being rescued, and that’s good for at least one night of fun,” Ari argued.

“I was being figurative about kissing frogs, in case you were wondering,” I said, wondering if this conversation was really taking place or if I was drunker than I realized. “In my world, that just means you go out with a lot of people, even if they don’t seem to meet your criteria on the surface, because you never know which one might be right for you.”

“And I bet our chances of finding someone are better than they are in here,” Ari added.

We paid our tab, then stumbled out of the bar. I’d lost track of time while we were in there, and now it was dark. I wasn’t sure wandering around Central Park at night in the condition we were in was a great idea. Maybe they didn’t metabolize alcohol the same way normal-sized humans did, but I was only just sober enough to be aware of how drunk I was. Unfortunately, I was drunk enough to let myself get swept along with the group.

Isabel hailed a cab – she had a rather effective method that involved blocking the street with her body. If a cab wanted to avoid serious damage, it stopped. We piled inside, Isabel in the front passenger seat and the rest of us in back. This wasn’t quite what I’d had in mind when I agreed to an evening out with the girls, and the cab ride up to Central Park was long enough for me to sober up enough to be self-conscious about doing something so crazy. As often as I’d used the expression about kissing frogs, I’d never had any desire to carry it out literally.

We all fumbled for purses as the cab came to a stop near the Plaza Hotel, but Isabel said, “Don’t worry, I’ve got it.” Then we piled out, crossed Fifty-ninth Street, and followed the path down to the Pond.

“You’re really going to kiss frogs?” I asked as we made our way down to the edge of the water. “This time of year, you may not see many. It’s getting too chilly for amphibians.”

“That actually makes our chances better,” Trix said. “It’s the enchanted frogs that’ll still be around. They don’t want to give up on the hope that someone will break the spell until they can’t tolerate the cold anymore.”

“How many of these are there? We don’t have a lot of princes in this part of the world, you know.”

“Prince is a figure of speech,” Isabel said. “It can apply to anyone in a position of power or wealth who needs to be taken down a peg. Oh, look, here’s one!” She lunged at a little tree frog sitting on a rock. It took her a couple of tries to grab it, then she held it trapped in her hands and brought it up to her face. I wanted to look away as she puckered up and kissed it, but morbid fascination made me stare. Nothing happened. She sighed and released the frog, which hopped away with an affronted-sounding “ribbit.”

I heard sirens on the street above. “We’re gonna get arrested for molesting frogs,” I moaned. I could imagine explaining that to my folks.

“Don’t worry so much,” Ari scolded as she lunged for a frog. Her fairy grace and speed gave her an advantage, so she caught it on the first try. Or maybe the frog just thought she was a giant fly and it had scored a super-size meal. “Nobody can see us, even if they look right at us. We’re safe.” Then she addressed her frog. “Now, handsome, make my dreams come true.” She kissed it, and then I almost fell over in my hurry to step backward.

The frog glowed. The glowing aura around it grew bigger and bigger, until Ari released the frog. Instead of falling to the ground, it hung at eye-level. Soon, the aura spread into the rough outline of a human form. When the glow faded, what remained was a handsome young man in an old-fashioned suit. Men’s dress clothing hasn’t changed much over the past hundred or so years, so it was hard to date his outfit, but he wore his hair in a flowing, Byronic style. He also looked utterly terrified. I put myself in his shoes – coming out of a froglike state to find himself facing a giantess and a couple of chicks with wings – and had to sympathize.

Ari shot me a glare. “You doubted us?”

“Not really, but you have to admit, it is weird, especially for someone like me.”

“Get over yourself,” Ari snapped. “I broke the spell that made you a frog for God knows how long, so the least you could do is show me some gratitude.”

He jolted, looking almost like he’d been shot, then gave Ari a courtly little bow. “I sincerely apologize. I beg you to forgive my poor behavior. I am most grateful, in spite of my churlishness.” When he rose from his bow, the panicked look returned to his eyes. “Now, if you ladies will excuse me, I must be leaving. Terribly busy. Somewhere else I must be. It was a pleasure to make your acquaintance.”

He then took off in an all-out run. I could have tripped him as he passed me, but I felt sorry for the guy. Besides, Ari had wings. If she wanted to catch him, she probably could.

But she didn’t. She just folded her arms across her chest and said, “You’re welcome.”

Isabel patted her on the shoulder. “Like I said, it’s the assholes who get that done to them. Not to mention out-of-date assholes. Casting frogging spells was outlawed decades ago. He’d want you to do his laundry and cook for him.”

“You could try another one,” Trix suggested.

“No, it’s Katie’s turn. An old-fashioned guy would be just right for her.”

I had no intention of actually kissing a frog, but I didn’t want them to think I was a stick in the mud. It could just take me all night to catch a frog, if I worked hard enough at it. They didn’t have to know I was a country girl who knew all about catching frogs, bugs, and other critters. With my brothers, I either had to learn to get used to them or spend my life screaming. “I want to look for a good one,” I said as I headed toward a stand of bushes on the other end of the pond. I could hide in there, pretending to look for frogs, until they sobered up or got bored.

I parted the bushes, stuck my head inside, and then shrieked at what I saw. 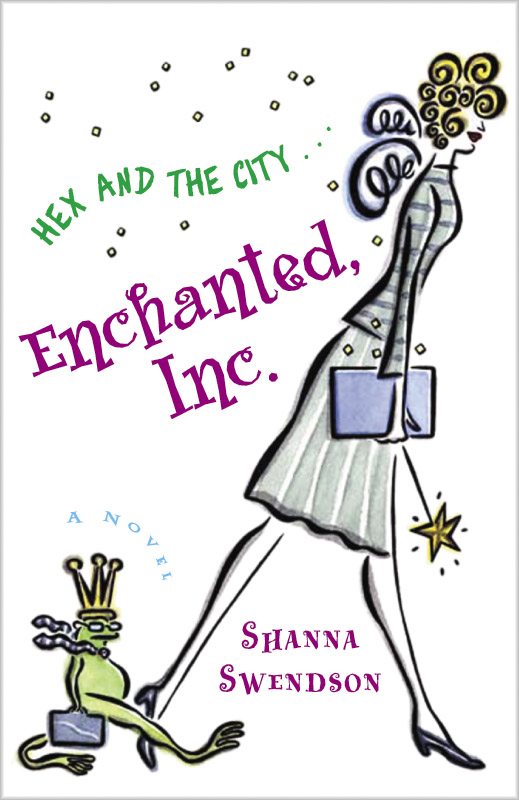