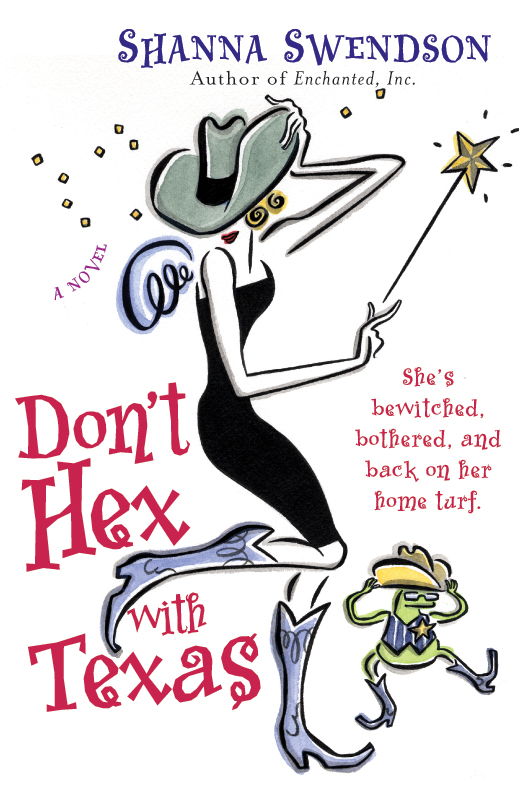 Book 4 in the Enchanted, Inc. Series

Everything’s bigger in Texas — including romance, magic, and danger!

Katie Chandler has fled fast-paced Manhattan and returned home to a simpler life, working at her family’s feed-and-seed store in Cobb, Texas. Leaving the sexy wizard Owen Palmer to battle his demons in the magical realm may have been a selfless gesture—after all, Katie seemed to attract evil, which only made Owen’s job a lot harder—but now it seems like trouble has followed her home. And despite the fact that Merlin, Katie’s old boss at Magic, Spells, and Illusions, Inc., has assured her that Cobb is free of enchantment, magically speaking, Katie begins to notice curious phenomena.

Soon Cobb is being plagued by a series of unexplainable petty crimes and other devilish mischief, and after her experiences in Manhattan, Katie knows “unauthorized magic” when she sees it. As this new dark magic strikes deep in the heart of Texas, Owen appears (literally) to investigate. Now Katie’s friends and family must show the bad guys why it’s bad luck to hex with Texas, while Katie and Owen combine their strengths like never before to uncover a sinister plot before evil takes root in the lone star state.

Humor, magic, action and romance, DON’T HEX WITH TEXAS has it all, and I found it very difficult to put down. A Perfect 10. — Romance Reviews Today

Shanna Swendson has done it again! By taking her established characters to a new locale, she gives them new adventures, but also reveals new depths to Katie’s back- story, including many secrets she didn’t know about her own family. — Fresh Fiction