The Story Behind Once Upon Stilettos

The inspiration for Once Upon Stilettos came in stages.

Part of the idea came as I was writing chapter four of Enchanted, Inc. In Katie’s job interview scene at MSI, one of the characters mentions that immunes are rarer because some of the more current psychiatric medications counteract the immunity. I have no idea where that came from. It was just something that popped into my head, but as soon as I wrote it, I knew that would have to be the plot of a future book. If the possibility of losing immunity existed, I’d have to explore it.

But my original plan for book 2 focused on the idea of corporate espionage. I’m not sure where that idea came from, but it was something that came up while I was writing the first book, and I knew who the spy would be.

When it started to look like there might be some actual publisher interest in Enchanted, Inc., my agent had me write up short blurbs on the future books I had in mind. I did one for book 2 that had the spy, and then a third book that was about Katie losing her magical immunity. My agent suggested I combine the two into one book because that was a stronger story with more going on. I argued that Katie had to be used to having her immunity before losing it became a crisis. She said that much of the first book, plus at least the intro of the second book should be enough for that. I fussed for a while before I admitted that she was probably right. So, I put together a one-page synopsis that combined the two ideas, which made me more sure my agent was right (I hate how right she is sometimes). The two ideas fed on each other so that the immunity loss raised the stakes of the search for the spy, and the realization that the immunity was gone fell nicely at the midpoint of the book. I’m not sure how it falls in the printed book, but in the manuscript, it comes almost exactly at the halfway point.

Meanwhile, there was this pair of red shoes … earlier that year, I’d been on a shopping expedition with a friend, and there in the Nordstrom shoe department, I saw them. They weren’t the kind of shoes I usually bought. For one thing, they were very expensive (to me). I tend to buy my shoes at Target and at outlet sales. I could buy about ten pairs of my usual shoes for that price. For another thing, they were red — shiny, glowing red. What would I wear them with? And they had such high heels and were so dressy. Someone who seldom left the house wouldn’t need shoes like that. But I wanted them. As we went through the rest of the mall, it seemed like outfits designed to go with those shoes kept popping out at me. My friend encouraged me to go ahead and buy them, but I couldn’t justify buying them. At the time, I was out of work, getting by on random freelance projects. An agent had requested my manuscript of the book that became Enchanted, Inc., but that didn’t necessarily mean it would go anywhere. I told my friend that if the book sold, I’d celebrate by buying those shoes.

In the months that followed, I frequently visited “my” shoes in the store. I dreamed up more and more ways to wear them. That dream started to seem more like a reality when the agent took me on and started to market the book, but then it started to fade when the rejections came rolling in. Finally, though, I got that magical phone call that Ballantine was making an offer with a two-book contract. I called my friend to tell her, and she said, “Time to go shoe shopping!” I drove over to her place to pick her up, and then we went to the mall. Once I got there, I tried to chicken out of buying the shoes, but they only had one pair in my size, and my friend and the saleswoman were able to talk me into it. I was still wrestling with buyer’s remorse as I drove my friend back home. Part of me wanted those shoes, but part of me thought buying them had been silly. When we reached my friend’s place, I’d managed to convince myself that I was glad I’d bought them. I turned to my friend and said, “They’re magic shoes.”

And then I got the “there’s a story!” shiver. If Katie was going to lose her immunity, she might be affected by a pair of magical shoes. I knew then what my motif for the book would be and even the opening line.

Those shoes have gone on to become a bit of a signature item for me. I wear them for most of my booksignings. I wear them to publishing events. I wore them to a red-carpet Hollywood premiere. I wore them on a TV appearance. And now I can’t imagine the book without them. 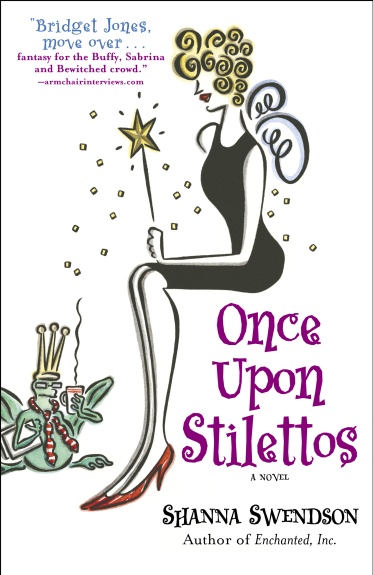