An Excerpt From Much Ado About Magic

I was lost in an underground maze, getting more turned around at every corner. A sea of dead-eyed zombies surrounded me, making me feel like I was swimming upstream. And the unearthly wailing was really getting on my last nerve.

I didn’t remember the Union Square subway station being this confusing, or had I been gone from New York too long? It had only been about four months—four months of driving to work, aboveground, in an old pickup truck and with no traffic to speak of. Was that long enough to lose my subway navigation skills?

I started to head down a flight of stairs, only to realize they went to the uptown tracks. I needed downtown. Morning commuters swarmed past me, ignoring my frustration in their mindless, relentless journey to work.

I caught my bearings and headed back the way I’d come, past the woman responsible for that creepy keening sound that sent chills up my spine. It was way too early in the day to have to listen to a musical saw, I thought.

Finally, I found the right set of stairs and headed down to wait for a train. I checked my watch, then remembered that I wasn’t running late because I didn’t technically have a job. I was merely going to see if my old company would take me back, and for that, I didn’t have to be there precisely at the start of business hours. They weren’t even expecting me.

A train pulled into the station, and I let myself get pushed on board by the flood of commuters. I’d missed a lot of things about New York, but this wasn’t one of them. The subways hadn’t miraculously become better smelling or less crowded while I’d been gone. The commuters on the train with me hadn’t changed much, either. There were the business-suited types heading to the financial district of lower Manhattan, a few downtown hipsters, a couple of fairies, and an elf. Once upon a time, the fairies and elf would have startled me, but now they were just part of the landscape.

One of the fairies smirked—not at anyone in particular, but rather in that way that generally means that someone’s up to something or thinks she knows something no one else does. At the same time, a strange tingling sensation made me shiver. Someone nearby was using magic.

I tried to play it cool as I casually glanced around the subway car, looking for any sign of magical activity. A man near me had an odd, glassy-eyed look, but was that from a late night and insufficient morning caffeine levels, or was he under the influence of a spell? My question was answered when he lurched forward and took the wallet out of a nearby man’s pocket. The victim didn’t seem to notice anything as the thief moved toward the smirking fairy.

I grabbed the unwilling pickpocket’s arm and said into his ear, “Hey! Do you really want to do that?” The thief blinked, lost his glassy-eyed look, and stared in shock and horror at the wallet he held.

Before he could do anything, the victim patted his pockets, then his eyes widened and he lunged toward the pickpocket, shouting, “Thief!”

The thief’s mouth opened and closed, as if he was trying to come up with an explanation, but he still hadn’t spoken by the time the wallet’s owner reached him. But then a few other commuters took on that glassy-eyed stare and, moving jerkily like marionettes, they blocked his path.

I moved myself between the unwitting thief and the spell-casting fairy as a fight broke out and then spread from the enchanted people to the rest of the car. In the chaos, I squeezed between fighters, took the wallet out of the still-shaken thief’s hand, and then wormed my way to the victim, ducking a roundhouse punch and sidestepping a misguided attempt at a karate chop.

I had to tug on the victim’s sleeve a few times to get his attention before I could drag him out of the fight and give him his wallet. “I thought you might want this back,” I said.

He started to thank me, but in mid-sentence he went glassy-eyed and before I could react, he had his hands around my throat. I instinctively grabbed his wrists, but he was bigger and stronger than I was, and I suspected his strength was magically enhanced. I hated hurting someone I knew was an innocent victim, but I preferred to breathe, so I kicked him firmly in the shin, then jabbed his ankle with the heel of my shoe.

He let go and backed away. Over his shoulder I saw the trouble-making fairy give me a look that could have set fire to dry grass. I felt a wave of magic hit me, but since I’m immune to magic, it had no effect. The lack of effect definitely had an effect on the fairy. Magical immunes are rare, and most of us who are in on the magical secret (instead of in mental institutions, where people who think they see fairies and elves tend to end up) work for the good guys of the magical world, a company called Magic, Spells, and Illusions, Inc. MSI doesn’t sanction using magic for harm or for doing things like making other people steal for you.

The theft victim went after another guy, who pulled something that looked like a keychain out of his pocket and waved it in the air. Everyone—including the theft victim—lost the glassy look and most quit trying to kill each other, though the fight had taken on a life of its own and some people were still throwing punches even without the magical trigger. The would-be thieving fairy rolled her eyes and sighed, then slipped out of the train when it stopped at Canal Street.

The guy who’d stopped the fight must have noticed me staring. “This is coming in handy,” he said, holding up the keychain-like thing. “I got it at Spellworks, and it helps counter these influence spells people have been using lately. You should get one.” Spellworks was the rival to MSI, and their spokesman, Phelan Idris, had been Public Enemy No. 1 for MSI until he surrendered the week before. Obviously, losing their spokesman hadn’t slowed them down, but I was surprised that they’d actually sold something that used magic to help or protect people. That wasn’t their usual style, so I smelled a rat. They had to be up to something.

“I’ll look into that,” I said, edging my way toward a door so I could escape at the City Hall stop. Couldn’t he have used his gizmo before someone tried to strangle me?

Once I was safely aboveground, I took a moment to collect my breath. I wasn’t even back at work yet, and I was right in the middle of the magical war. It was a good thing I had a history with the company, I thought as I inventoried the damage to my appearance. I’d have been sunk if this had been a real job interview. My hair had been neatly pinned up, but pieces had come loose around my face and neck. I had a run all the way up one leg of my pantyhose, the sleeve of my blouse was ripped, and I could feel bruises forming on my neck.

Yes, this was exactly the way I wanted to present myself to my former employer and ask for my job back.

Return to Much Ado About Magic 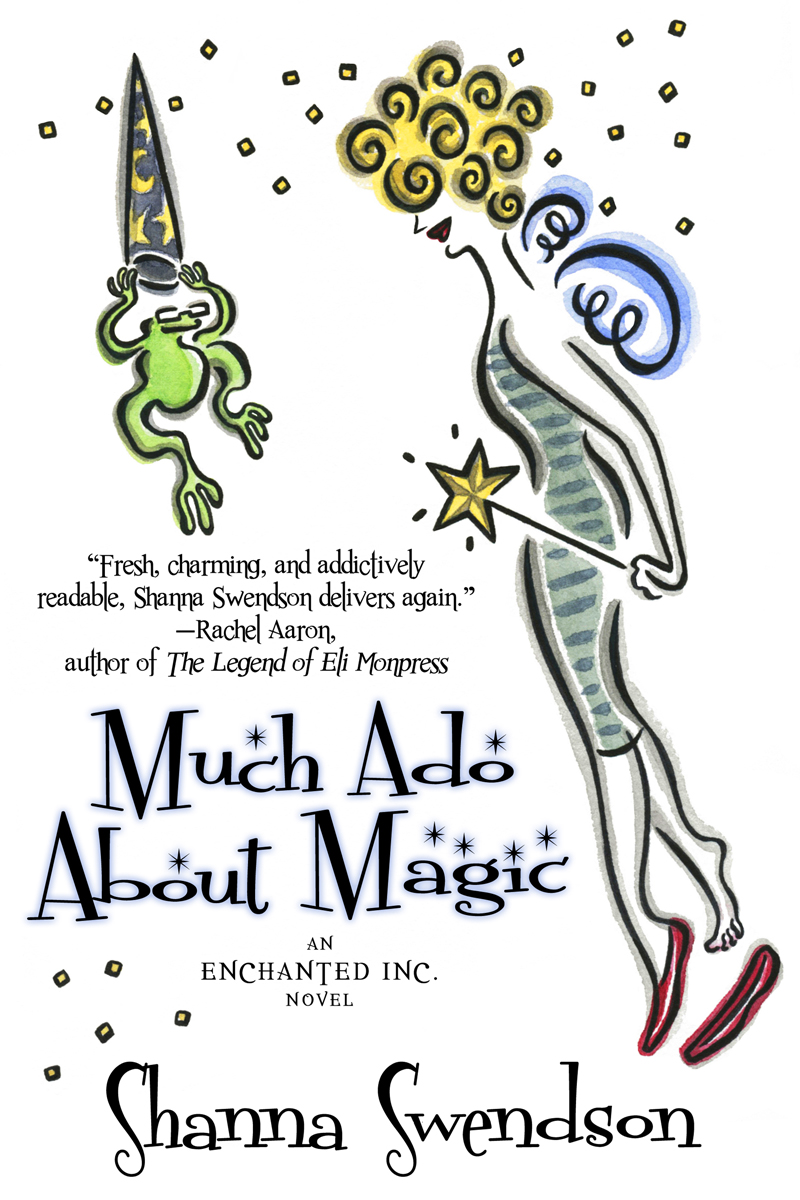